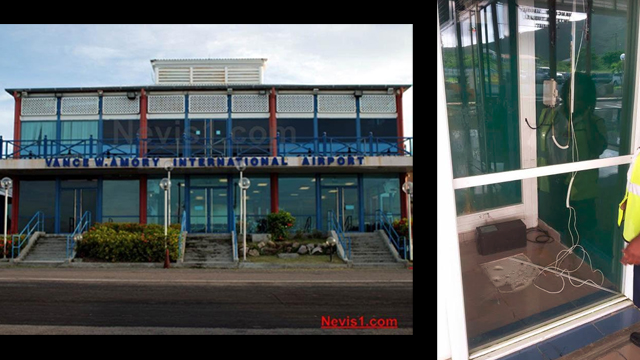 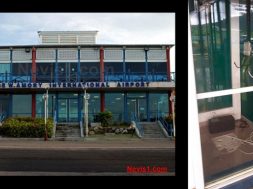 THG Network (Nov. 17, 2016) — Police on Nevis are investigating a daring robbery where an Automated Teller Machine (ATM) has vanished into thin air.

Reports are that just before 2 p.m. on Wednesday afternoon, police received a report that the St. Kitts-Nevis-Anguilla National Bank ATM at the Vance Amory International Airport at Newcastle was missing.

The bank machine was situated just outside the Arrivals Hall of the airport.

THG News visited the scene and can confirm that the entire apparatus was removed from within the glass enclosure, leaving wires that were attached to the machine dangling.

Police confirmed the incident late Wednesday, but up to news time (today) no further information was made available to the media or the public.

THG is working all its sources, placing calls with the Premier of Nevis, the Hon. Vance Amory who has responsibility for Ports, the police, the management of National Bank and the Manager of the Nevis Air and Sea Ports Authority Mr. Oral Brandy.

THG News can confirm that two security officers were assigned to the 9:30p.m. to 5:30a.m. shift.

Meanwhile, nationals have taken to social media, questioning how such a heist could have taken place at what is supposed to be a secured area, and how the discovery was not made until late afternoon when the ATM apparently disappeared overnight.

One blogger wrote “maybe they will steal a plane next.”

Some questioned whether there are implications for the standing of the airport as an international port, which is treaty to several protocols. We will have much more in THG Tonight.