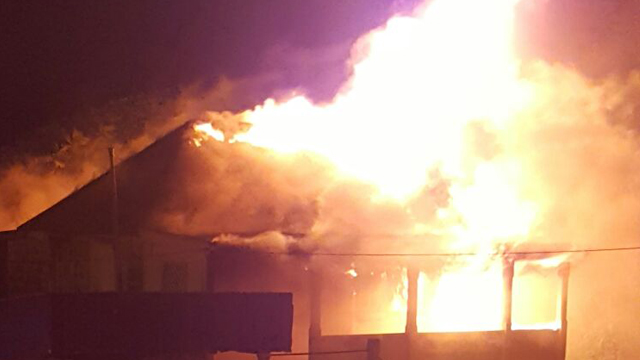 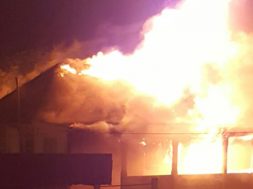 THG Network (Feb. 7, 2017) — The upper level of Brooks Service Center, on the corner of Main Street and Matchman’s Road in Gingerland, Nevis, went up in flames late Monday night. The Nevis Fire Department told THG News it received the distress call from neighbours around 11:23 pm, responded quickly, and had extinguished the flames around 1:15 a.m.

The entire second storey, which housed a living room and four bedrooms, and all its contents were destroyed, with the only recognizable things being the iron bed steads and an iron chest.
Luckily, the building, which was the property of the late James Brooks, a Nevisian Councillor and businessman, and his wife Amabelle, had been unoccupied for years.

Mrs. Joycleyn Liburd, who lives adjacent to the burnt-out building, told THG News that the building was constructed in the 1940’s, and had been a landmark on the Gingerland landscape.

Samuel Powell, retired civil servant, musician, and nephew of the late Amabelle Brooks, lamented the loss. He said he had learnt to play the piano in that same living room, as a teenager. The piano also went up in flames.

An adjoining cola shop, which produced the sweet beverages from the 1960’s, a bread shop and a gas station, which operated up until three years ago, were all intact.

The fire department said, Tuesday morning, it was too early to determine the cause of the fire.