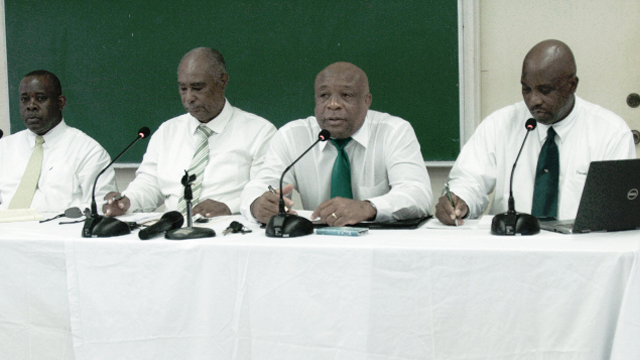 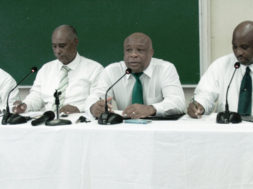 CHARLESTOWN, NEVIS (Aug. 10, 2016) — “We are active but we were never dead. We were never asleep” were the words of Nevis’ Former Premier, now Leader of the Opposition in the Nevis Island Assembly, the Hon. Joseph Parry when he was asked at a press conference on Wednesday, to respond to claims by members of the Nevisian community that his party is not functioning effectively.

In reflecting on the recent elections that Nevisians had voted in, Mr. Parry said it was important to give the electorate the opportunity to absorb its decision not to return the Nevis Reformation Party [NRP] to office.

“The people of Nevis must ask themselves why,” he said, adding that “You cannot always pass the blame to the other side. You have to take responsibility as well and so after that landslide victory, what were we going to tell them?…People had to come to a sense of reality. You had to give them time. You have to give CCM time to fail again because you know they were going to fail again, all the signs were there.”

At the press conference, which was held in the Nevis Cooperative Credit Union’s Conference Room, Mr. Parry had the support of colleague Members of Parliament Hon. Robelto Hector and Hon. Carlisle Powell and Former Deputy Premier of Nevis, Hensley Daniel. The four men delivered brief remarks before members of the media were invited to ask questions and make comments about their presentations. Among the matters addressed were the ongoing rehabilitation of the Bath Stream, the state of the capital city of Charlestown, leadership within the NRP and the NRP’s plan of engaging the community and media.

In commenting on the latter, Mr. Parry said his party had planned a series of events to ensure its presence would be felt by the Nevisian electorate.

He said, “We know that the time is now. We know that the time is now because the people have come to a realization. We are having our convention. We’re having our caucus today and we’re having our convention on Sunday and we’re starting public meetings. We will also have town hall meetings because I want to say to you it is very important that you have dialogue with people. You get far more out of dialoguing with people than speaking to people on a loud mic. Visit people, not just town hall meetings. Visit them, go to their homes, sit down and listen to their problems and of course using the media for public relations.”

Meantime, Mr. Hector, who is the Parliamentary Representative for the St. Paul’s Parish on Nevis, said boldly that his party had addressed every major issue within Nevis since sitting on the opposition benches in Parliament. He said however, that while many persons had been agreeing with their comments, particularly on social media, they are afraid to publicly express support of the NRP.

“If you look at the social media, I am picking up a pattern that you will see a number of likes but you wouldn’t see any comments. You would see a number of views when things are posted from the opposition and I am getting a feeling, I don’t know how the media can help us, that there is a genuine fear in this country as to how the government deals with the people in their personal capacity on some of the issues,” Mr. Hector stated.

The NRP, which lost to the Hon. Vance Amory’s Concerned Citizens Movement [CCM] in the 2013 Nevis Island Assembly elections, will host its caucus later today [Wednesday] at the Franklyn Browne Community Centre, a public meeting on Friday afternoon in Charlestown and its convention on Sunday afternoon at the Jessup’s Community Centre.