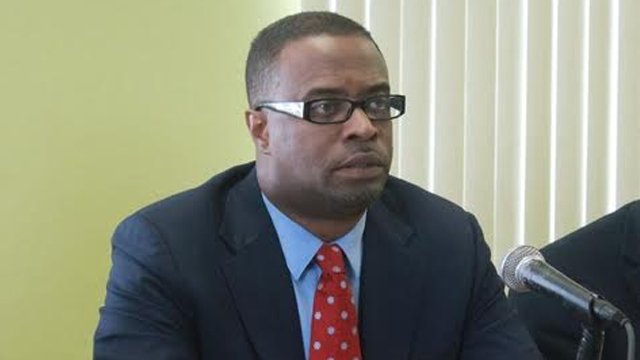 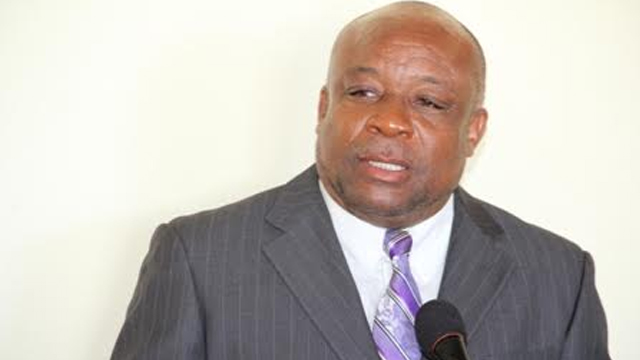 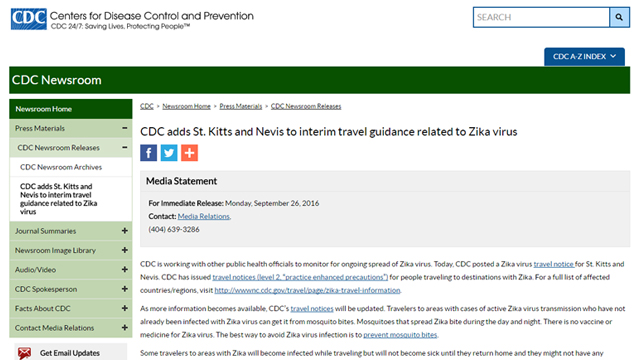 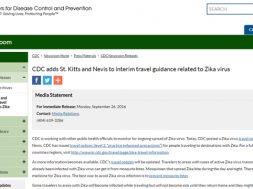 THG News (Sept. 28, 2016) — It’s what everyone is talking about in St. Kitts and Nevis, the Centers for Disease Control’s travel advisory in light of the Zika Virus.

Recently, THG News reported that the twin island nation had three confirmed cases of the virus and while we did not specify whether those cases were on St. Kitts or on Nevis, Nevis’ Health Minister and Deputy Premier, confirmed to this media house that there were no cases on Nevis.

During a recent social media interview, the Hon. Mark Brantley revealed “Nevis has to date no confirmed cases of Zika.”

He said “it is obvious that that might change and if and when that changes we shall be certain to update and advise the general public.”

That comment came just moments before he expressed appreciation to his island’s “hard working health professionals especially those in environmental health, the Health Promotion Unit and the Solid Waste Management Authority” who, according to Brantley, “have been in the forefront of the fight against the spread of disease.”

Nevis’ Former Health Minister Hensley Daniel, who is a consultant to regional organisations, spoke with THG News on Tuesday morning about the impact of the travel advisory.

He said, “That’s not good because it means that people who want to come to St. Kitts and Nevis for fun, to enjoy themselves and relaxation you are raising doubts in their mind about whether they are going to be sick,” adding that “Nobody travels to destinations where they suspect that they will be sick.”

Daniel, although reluctant to give advice to the current Nevis Island Administration who he said ensured that he could not work in his country, told our reporter that “What is required is for us to say that St. Kitts and Nevis, and Nevis in particular, remains a pristine environment.” He stressed however that the Health Minister would have to say what he’s “doing to ensure that that pristine environment is maintained.”

Although suggesting that all is not lost, Daniel made it clear that Health Minister Brantley acted prematurely when he, a few weeks ago, said there were no Zika cases in St. Kitts and Nevis.

“We live in an international community, we promote tourism so there’s continuous interaction among people so to argue and boast that you do not have any (Zika) (knowing) you’re dealing with a contagious disease, must always be seen as premature but what you need to do is to ensure that it doesn’t become widespread,” Daniel explained.

Health Minister Brantley, on the other hand, has maintained that “health is not a political football. It is a serious matter which requires serious attention from serious people.”

CDC’s travel advisory for St. Kitts and Nevis came on Monday however, several other Caribbean islands have also had advisories issued for them. Among those islands are Anguilla, Antigua and Barbuda, Barbados, the British Virgin Islands, Jamaica, Puerto Rico, the US Virgin Islands, Trinidad and Tobago and Sint Maarten.

0
0   0
previous Police Officer in Custody, Another Firearm Seized by Police
next Another Security Official Arrested for Drug Smuggling